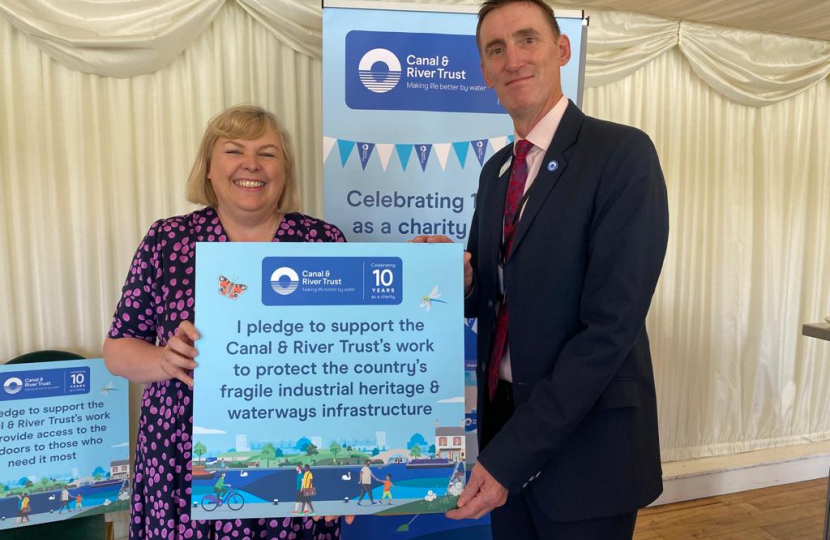 Jane Hunt MP and around 50 other parliamentarians, joined colleagues and representatives from the Canal & River Trust to celebrate the charity’s tenth anniversary, to learn more about its work in Loughborough and to discuss the exciting Town Deal plans in the town.

The Canal & River Trust protects and preserves more than 2,000 miles of waterways across England and Wales – a network that is used by millions of people. Their network includes the River Soar that runs through Loughborough.

Under the Trust’s stewardship, our canals now have more boats than ever before and are used by more people than at any time in history.  The Trust brings vital green and blue space to the doorstep of millions of people in towns and cities where access to this space is vital for improving community wellbeing and to tackle health inequalities.

Attendees at the reception heard about the continued need for funding and support to safeguard the waterways, with the 250-year-old ageing and vulnerable network exposed to changing weather patterns, and how a more resilient network will help society mitigate the effects of climate change in the years ahead by providing sustainable transport routes into towns and cities, delivering flood mitigation, water transfer, a supply of green energy, and improved biodiversity especially in urban areas where such rich blue-green space is at a premium.

Speaking about the reception, Jane said: “It was great to join the Canal & River Trust to celebrate the nation’s waterways on their tenth anniversary.

“As part of the exciting new Town Deal plans for Loughborough, the Canal & River Trust will be embarking on a major project to improve the towpath running alongside the River Soar, which will make a huge difference for walkers and cyclists. It will also create a much more sustainable travel corridor in the town.

“In total, £885,000 will be spent on the project, making it an attractive and accessible place next to the river. I really enjoyed talking to the Canal & River Trust about these plans in Westminster and I thank them for the work they do to maintain the waterways in Loughborough.”

Jane Hunt MP visited the Great Central Railway today to celebrate the announcement that £280k of Town Deal money will be awarded to contribute to its locomotive shed and education centre.