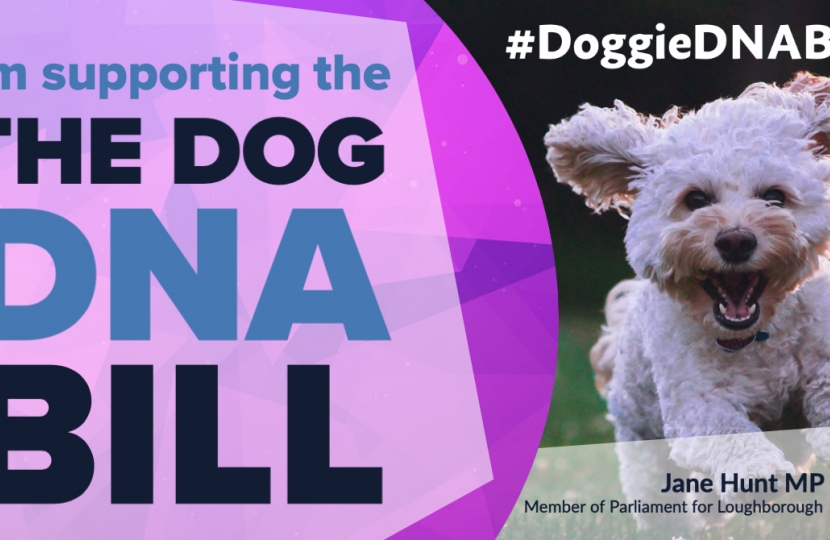 Loughborough MP and dog lover, Jane Hunt, is backing a Private Members Bill in Parliament this week to create a national register of ‘doggie DNA’ as a long-term alternative to microchipping. If successful, the new database will create a more modern solution to combat the growing scourge of dog theft as well as lost pets, ownership disputes and ‘puppy mills’.

The Bill will be introduced by Arundel & South Downs MP, Andrew Griffith, and has gained the support of 14 MPs, including Jane. Currently, the law requires all dogs to be microchipped, but these can be inserted incorrectly causing pain and suffering, sometimes work themselves out and can be cut out by unscrupulous thieves. Dog theft has sadly increased by 250% over 2020 according to Government estimates; a fact that Jane heard from the Dogs Trust whilst on a visit to their rehoming centre near Loughborough recently.

As well as securing the support of MPs, it is also backed by the RSPCA and the National Police Chiefs’ Council. Unlike microchips, DNA is an indelible, reliable marker to identify a dog. If a pet is ever stolen or involved in an ownership dispute, the database will have everything needed to prove who is the pet’s owner.

Speaking about the Bill, Jane said:

“A Doggie DNA database would have many uses including tackling the heart-breaking crime of dog theft. It is a sad fact that the numbers of dogs being taken from their owners has gone up hugely over the last few months.

“Although dog owners are required to have their dog microchipped, the chip can be removed or work itself free. The Bill will create a more reliable version of the current microchips. Technology has moved on and DNA is a unique record that is now easy and affordable to collect.

“The theft of a dog is heart-breaking for the owners and upsetting for the dog. Anything that we can do to help tackle this growing problem is worth pursuing. That is why I am backing this Bill.”

Jane Hunt MP visited the Great Central Railway today to celebrate the announcement that £280k of Town Deal money will be awarded to contribute to its locomotive shed and education centre.